If you really like the excellent game of Starburst, then surely will appreciate the chance the Leo Vegas casino is going to offer you right now. Until the 22nd of June, the casino will be £100.000 in total money rewards as cash prizes and the weekly draws for Apple devices.

Every wager worth £1 will generate a single ticket, where the top 50 tickets can be followed on the promotional page. Each week will carry a handout of £2.500 in winnings for the lucky ones, with a grand prize of £10.000 available at the end of this campaign. The top 100 players will also be getting some share from the prize pool.

All of those who have received at least 1 ticket can still get a reward from the Monday draws carried out each week, involving iWatches, iPhones and iPads. Active depositors who will invest the minimum of £30 and wager it the same day, might get 5 Starburst Free Spins, available for all days of this promotion. 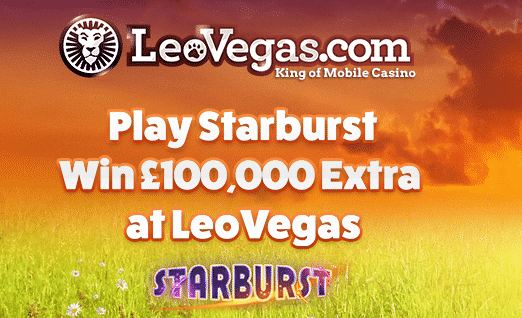 * Depositors of at least £30 who wager this amount on the same day, are going to receive 5 free spins for Starburst on each day of the promotion

* Daily free spins are valid for 24 hours only