If you would like something to drive your imagination, then look no further then Royal Panda Casino and the next challenge the place has prepared for its players. This huge promotion allows a chance for winning a customized car called the “BetMobile”, a uniquely tuned vehicle that will certainly provide the originality for showing off some passion for gambling.

Participants of this competition will have to play a featured slot each week of the campaign and collect the highest scores to transfer to the next level which would be a grand finale. Through the month of September, each week will have its own slot game that will be promoted during that time and players can test their skills in order to amass the amounts of points that will further make the top three challenges to become enabled in the final stage.

There would be nominated slots for the upcoming four weeks, so pick up the games each week to make for the top three places that will progress further to the finale. The highest three combinations on slots will be credited with up to 50 Free Spins for the upcoming Starburst game. Each week, there would be also free spin raffles split among the ones who have ‘liked’ the Royal Panda Facebook page. 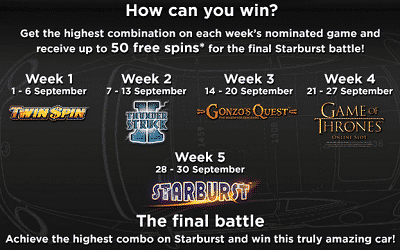 Starting with the Twin Spin video slot, the next games would be Thunderstruck II, Gonzo’s Quest and Game of Thrones. The finale will be hosted on Starburst, where the top participants from each week would have free spins to climb up the ladder toward impending success, where the BetMobile car awaits for one lucky winner. Winners of each week will be respectively announced on the Facebook page during Monday. Join this big promotional event at Royal Panda so that you too can have a chance at getting to drive off in this amazing vehicle.