Free Spins on Planet of the Apes – this weekend at Guts

Free Spins on Planet of the Apes – this weekend at Guts

The month has not even ended yet and NetEnt is already planning to release another video slot, this time with a science fiction theme, based on the official license from the 20th Century studios. “Planet of the Apes” returns once more to offer its unique take on a world ravaged by war and dominated by intelligent apes, as presented in the classic series of sci-fi movies. Based on the two of the most recent films: “Rise of the Planet of the Apes” and “Dawn of the Planet of the Apes”, makes the slot a true masterpiece in terms of software as well as entertainment in genera. The game goes live online on the 23rd of October, but before it arrives – you can already grab a couple of free spins to immediately play it this Monday.

A warm up weekend promotion has been launched by casino Guts just the day before yesterday and the players can quickly get some free spins to play Planet of the Apes as soon as it becomes available. In order to receive any free spins whatsoever, you must deposit a qualifying amount depicted in the section below. Visit the Guts casino between October 19th and 22nd to receive a bonus of 5 – 100 free spins, credited at 18:00UTC on the 23rd October. 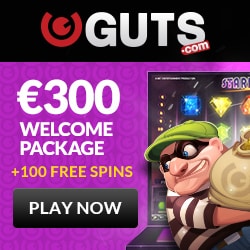 Featured game: Planet of the Apes