It may be already well known by many, that the music star Adele will perform in the not too distant future in the city of London, but not everyone is rather aware how the concert can be witnessed without paying for it, plus all of the tickets could have already been sold out. That is where CasinoCruise comes in, with its incredibly attractive promotion that is sure to help the viewers achieve the nearly impossible. If you love Adele and her wonderful music, than you simply must attend the next campaign by this online casino, where the main prize will be none other than a chance to witness the live concert given by Adele and have a great time during the stay in London for the duration of the performance, at that.

One lucky winner of this campaign, as well as a companion of choice will both attend the live gig that is planned to take place in April this year. If you are already interested in what you have gathered so far, than keep in mind that every £$€30 deposited at Casino Cruise will get you nearer to become part of this exciting event. Just opt in for this fabulous promotion and with each deposit of £$€ 30 made within the period of this promo, you might just get yourself a tighter grip on the winning ticket for the future live concert. It all can be done between now and 24th of March, so by making deposits within this time frame, one might collect the entries for such draw. 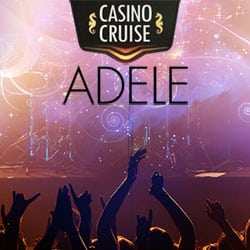 That will guarantee a whole month of simply trying to get yourself and a partner of your choice to spend some quality time in the United Kingdom, with one of the finest singers of the 21st century, to be exact. It is quite unfortunate however, that the UK players will not be able to participate in this campaign.

All the rest can freely deposit as much as they wish, so that the ultimate reward can be achieved in the following manner and with far better results. The more one deposits, the better chance to win it will be in the end, as is the usual case for a random casino raffle. If the three consecutive nights in one of the more luxurious hotels in London appear to be quite a thing for you, apart from seeing Adele in real life of course, then you must quickly take your chances as they are and join this ongoing promotion by CasinoCruise, where a lot can happen in the final outcome.

* UK residents are not eligible to join this casino event

* The main prize of this promotion will include: 2 tickets to see the live concert by Adele on the 4th April 2016, 3 days to spend in a London hotel, flights to the city covered by up to $500 in total