Win a Trip to Disneyland Paris with Fruity Casa

Win a Trip to Disneyland Paris with Fruity Casa

Mickey Mouse and Donald Duck have become pop culture staples long before the term has been even coined, although Walt Disney have somewhat made a great impact on the entertainment industry ever since the initial release of classic animated features, including motion picture films and animated cartoon strips. Currently there are lots of different characters created by the Disney studios nowadays, ranging from funny anthropomorphic animals to the everlasting legacy of princesses, as well as multiple other parts of this fantasy universe. If you have always dreamed about going to Disneyland when you were a wee little kid but never got the chance to see it firsthand, then now you may realize this childhood dream by taking matters into your own hands and going on a long deserved vacation to France. Join in the fun over at the online casino Fruity Casa and you will not regret it, as right now the place is not only filled with fantastic games like video slots, but also runs a campaign that revolves around the Disneyland Paris experience.

Remember to visit Fruity Casa between the following Tuesdays: 16th August and August 23rd, which is exactly when the Disneyland promotion is going to last. The casino has guaranteed to send one lucky person on a 4 day long trip to Disney Land in Paris, available for two people so that you may take your partner or friend along with you. Every deposit worth at least €20 will count toward the raffle and give you a single entry ticket so that your participation may be taken under consideration with the draw is finally hosted on the 24th of August 2016. A €200 deposit is going to grant you 10 tickets, which is already quite enough to have a chance at grabbing the main prize, so do not waver when it comes to this.

With each additional deposit you get another raffle ticket, as there is no limit for the entries that you can collect throughout the entire period of this promotion. This is going to significantly improve the chances at winning, so spin away and aim for the win, as the journey to Disneyland awaits. Find out all about this spectacular campaign as well as any terms or conditions that go along with it, by displaying the promotions section on the Fruity Casa website. 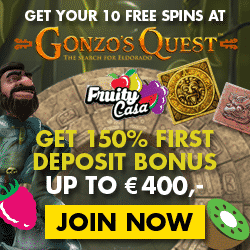 * A minimum deposit (€20) is required during this period

* All deposits count, that including mobile and desktop

* Even though playing qualifies, it may not guarantee a win in the end

* A cash alternative of €2000 can be claimed instead

* Winners may expect to be contacted by phone