The festivities on the New Year’s Eve this season are plenty, but none of them as exciting as the following promotion by SlotsMillion casino. The Super Lucky New Year Promotion will be held at this online casino between the 27th of December 2015 and the 3rd of January 2016.

The main event would be filled with amazing cash prizes that are sure to bring the winners lots of occasions for some extra spending in the future ahead. Players can take part in the wagering race that is going to be active during the exact period of time, where a total prize pool of €1500 awaits for the final winners. 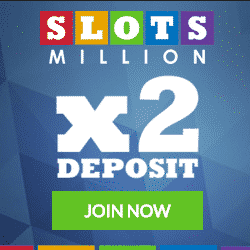 Only those who have wagered the most and on the games selected for this campaign, are going to be taken under consideration to win one of the cash prizes that are available distinctively for the places acquired at the end of the competition.

Games that would be featured this campaign and on which the players can actively wager, include: Super Lucky Reels, Diamond Wild, Absolute Super Reels, Ultimate Super Reels, Super Fast Hot Hot. Be sure that you do not miss this outstanding chance and join the SlotsMillion casino to witness the upcoming New Year, but remember that only those who wager the most can win the money rewards after the promotion has come to and end.