See Coldplay perform live in London thanks to Dunder Casino

See Coldplay perform live in London thanks to Dunder Casino

Regardless if you are a fan of modern era music or prefer the classic oldies, there is no doubt that you have at least heard about Coldplay. One of the most popular British bands up to date, is always coming back with their new songs that define the genre in their own, unique style. If you are a fan however, then you probably would like to see the band perform live in concert that happens to take place in London quite soon. This year’s summer looks rather promising, as in the middle of June 2016, all Coldplay fans will gather in the UK for one more outdoor festival of alternative rock music. Though it might be quite costly for those residing outside the United Kingdom, one does not have to feel excluded for much longer, as with the aid of Dunder Casino, your dream might come true in a blink of an eye.

A spectacular casino draw is going to be carried out by Dunder really soon, as on the 10th of May, everything will be decided as to who goes on a tour and who stays back home, but still enjoys some of the amazing goodies that the online casino has prepared for all lucky winners. Be sure to join Dunder between the 25th of April and the 8th of May, because it is right then when you can opt in for the challenge and earn tickets to join the upcoming raffle. The lottery is still far ahead, but right now you can gather as many tickets as only possible, because that gives better chances at winning the main prize. With each €20 deposited, a single ticket will be credited, yet one should not take any chances and improve the possibility for winning by depositing on more occasions. One ticket will suffice to be included so far, but why stop there if you can gain so much in the end. 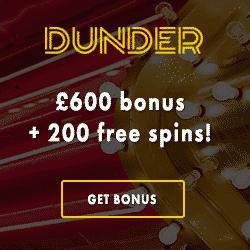