King Of The Reels

King Of The Reels

Get ready this month for more gaming action at the exclusive online casino LaRomere, following some spectacular game releases that will take the players by storm. The online casino will feature many amazing promotions that would likely be remembered as the next chapter in the history of casino based gaming, with several chances that you might use to get a piece of the action along with plenty rewards.

King of the Reels promo would be featured at the online casino this month and it would be followed up by the fabulous prize to win during the time of this campaign. Between the 9th and 26th of November, players would be able to win a share of the $/€20,000 grand prize that is ultimately the reward for which the stakes would rise. If you reach the top of the leader board by the 25th of November 2015, then count yourself lucky, for the gambling throne would be ultimately yours – along with the main prize of $/€5,000 that goes along with it. The rest of the total prize pool would be split among the players who will finish at the remaining 2nd-15th positions. Plus, a top spinner on the 19th of November selected by the casino, will receive a brand new Apple iPad which makes the competition all the more worth it in the end. The leaderboard points can be earned entirely by active wagers and with each $5 wager you receive a single point that adds to your total score. 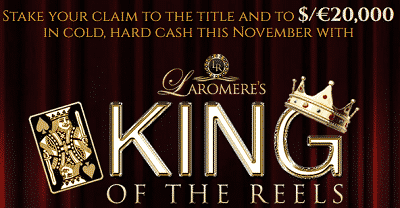 On 12th of November will be also the premiere of the King of Slots game that launches at LaRomere for the very first time. The slot will be available for both: desktop and mobile devices, so be sure to check the casino website for the upcoming free spins bonuses that are sure to be valid at the time of the release. Embedded with special features like Sticky Wins and Wild Substitutions, the slot would likely be followed by some great chances for an ultimate winning streak. Check out the previous info on how to take part in the campaign that involves this game in particular – King of the Reels.

LaRomere Casino is also very happy to announce yet another new game from NetEnt – Koi Princess – that would be introduced on the 24th of November. It is also worth mentioning, that this uniquely conceptual production is based entirely on the anime and manga art style that fans all around the world have come to appreciate so much already. From this day forward until November 29th, players will be able to win a VIP trip for two to the Technology Center in Tokyo. Each 20 spins made with a 0.20 bet on the Koi Princess will grant a single ticket for the draw, where at the end of this promotion 50 players will be drawn, but only one lucky person can walk away with the main prize.

There will be also $50 and $100 gifts for the remaining 49 winners, so stay tuned for more details on this event that will certainly be posted on the casino website. If you happen to love the Japanese comic books and cartoons, then you simply must participate in this fantastic event, allowing yourself to go and see the capital of your favorite pastime with a friend.