The Olympics are ready to begin and with the opening ceremony taking place just tomorrow, many will be spending their time witnessing the athletic events which are hosted in Rio this year. It would be a glorious display of the human ability to adapt and overcome any challenges, as in the true spirit of competition, there would be a lot of different disciplines to follow. One thing is for certain; such a huge event is going to attract plenty of sports fans and other enthusiasts who will be joining the live feedback straight from Rio, thus providing them with an exciting distraction from the monotonous every day life. It sure looks like the year 2016 has been very successful in terms of involving global entertainment, because of the recent closing of the Euro Football Championships and the upcoming start of the Olympics.

If you plan to stay at home and watch the summer games, then do not forget to visit Casino Ventura from time to time, because this place has already organized a grand new promotions, just for the duration of the Olympic games. Every player who deposits at least €20 between the period of 6th and 21st of August, will instantly obtain 20 Free Spins on “When Pigs Fly”. When Pigs Fly is the most recent NetEnt video slot that features space fairing pigs and other fantastic elements, usually implemented by the Net Entertainment company. CasinoVentura will holds this promotion for a limited time, but each day brings a new opportunity to get some free spins, so it should rather be a very successful campaign. 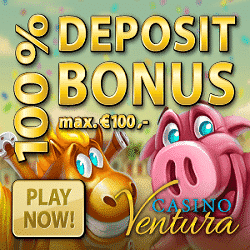 * All free spins granted by the casino are wager free

* The following bonuses are being credited within a 24 hour period

* Promotion can only be claimed once per user

* Players must still request their spins via live chat

* Campaign is open to all those who can access NetEnt games